This morning M brought me paper and a marker. He wanted me to write rules for a treasure hunt. Now, I like a nice metaphor. I didn’t elect to start a PhD in a weirdly specialised area of English Literature for no reason, folks. But two items in on his list of rules, and it seemed to be jumping off the page. Look…

That’s hopefully what we are doing, all the time. It doesn’t matter the hour of the day or the location of our bodies, we are exploring and playing and learning.

2. It’s not about racing and getting the most treasures.

AMEN. It’s not about that, not at all. Everyone develops at their own pace. Everyone considers different things a treasure. There is enough to go around.

3. Some treasure will hide super good.

Sometimes it’s hard to know where your heart lies. Sometimes even once you figure it out, it’s not the easiest thing in the world to achieve. That’s okay. It’s just hiding…super good.

4. After you get all the treasure (chocolate coins), eat it.

Accomplishments are to be celebrated with joy. No use in searching for that treasure then just reburying it. It needs to be integrated into who you are, enjoyed, and then perhaps shared with the world.

5. Hope you have great fun and come back again and again. Treasure is always out!

There is always more treasure available. New levels of treasure on old themes, or even totally new stuff. You normally like diamonds, fine. Excellent. But look! You can like emeralds, too. You can expand and change your mind, and maybe even branch into rubies. You can find treasures most anywhere, and it’s always worth looking.

I love that little guy. Such a kind hearted, wise person.

We’ve been talking a lot about World War 2 recently, mainly sparked by M’s interest in fighter jets. I asked on our local Facebook home ed group about places to go see jets, and Jet Age Museum was recommended by a few people. It is only open weekends and bank holidays, though it apparently will open for booked visits of home ed groups during the week! Admission and parking are both free.

It’s worth mentioning that this place is right next to an airport – the sort of airport with loads of small planes and helicopters constantly taking off and landing. We accidentally found the airport first and hung out there for a few minutes, which was one of the happiest mistakes we’ve made in awhile!

Parking at Jet Age also borders airport fields, albeit from a bit further away. There’s a nice vantage point and picnic tables!

This is another smallish museum…though it’s worth noting it’s only a ten minute drive from Gloucester City Museum!

It features old jet planes….mostly indoors, but a few outdoors. A couple of the cockpits are open for children to sit in – and it’s here I must say that half of the charm of this place are the volunteers running it. They are on hand to discuss each jet in detail…and in our case, to tease the kids about backwards helmets, provide a hunt for letters, give out fantastic posters, etc. Just so friendly and knowledgeable, which might really appeal to someone with an older child very into old fighter jets.

The highlight (which sadly I missed, as I can’t climb ladders!) was Suzy and the kids going up for a tour of a Vulcan – a 28 foot climb from ground to cockpit. They sat in the various seats of the five in the plane, learned what job corresponded to each seat, and spent a good ten or fifteen minutes exploring the cockpit in detail. As such, there was a bit of a wait for this – and a minimum height restriction. Both kids and Suzy adored it.

All in all, I’d recommend this place. But if you have an hour drive to get there, do google other local things as I don’t think you could spend more than a couple of hours here. (Unless you went to the little on site cafe, which we didn’t on this occasion.) I’d also recommend a donation….this place is a local labour of love, and I like supporting that. 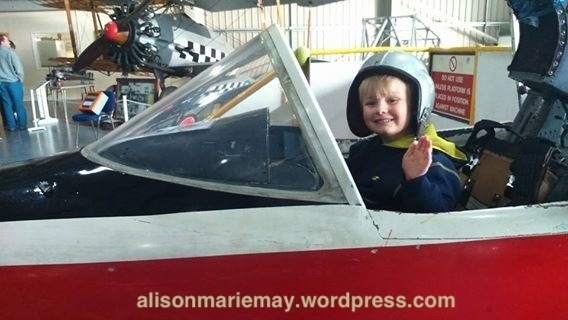 We’ve been away from blogging for awhile – namely because we are saving money to buy a proper desktop, and until that thing enters our lives, typing with two fingers on an iPad mini leaves a bit to be desired!

In the last couple of weeks, though, we’ve been to some new to us localish places….all of which were so good, I wanted to share in case other local families might want to visit.

First up, Gloucester! There is a LOT there.

We first visited Gloucester City Museum, which was a small yet fabulous museum. It also has the best ever gift shop – good stuff for very reasonable prices…and a gorgeous cafe in situ. The museum is largely focused on the Romans. There’s access to see part of the real Roman wall surrounding the area (you can see more in the pedestrianised high street), a Roman kitchen, Roman coins, etc.

There’s a photography exhibition on the second floor with some excellent pictures from around the world, a smallish dinosaur area with skeletons (and ore, if your kid likes Minecraft!) and play dinosaurs. There’s a toddler play area with a few soft toys, as well as the star attraction – this tiny wall thing with windows. Kids shine torches in to see what sorts of animals prowl on the night, and it makes scary ass noises. This was a major hit with our little group, comprised of 2-7 year olds.

It also had an exhibition of ‘caveman art’ made by local children. I only mention this as S recently made a spectacular piece of similar art in her pottery class very recently, and she was concerned the museum would want it.

Now, this museum is fab but the day only entrance price isn’t great. We ended up paying £14 for a two adult, five children year membership to this museum and Gloucester folk museum, which was more than fair!

The folk museum is crammed with trails your kids can do – worksheets covering various areas of the museum. S did the ground floor one, which involved drawing a cow, and writing the answers to some questions based on exhibits. M chose to complete a spot the difference on old fashioned motorbikes one once he realised a cool, free button for his backpack was the reward. This museum was great. Again, small, but fun. Bits on the war, loads and loads of brass plate rubbings to do, local Gloucester stuff largely revolving around a taxidermy cow (I jest not!), etc. Lots of little exhibits of particular interest – swords, old dress, a retro kitchen, etc.

The real draw here was the back garden, which had an unobtrusive little shed filled with ye olde fashioned children’s toys. We were in the garden for over an hour playing with steel hoops, skittles, hobby horses, etc. There was also an Anderson bomb shelter, weirdly enchanting owl statues, and little nooks filled with benches for the worn out adults to rest on. Ha.

The other museum, situated between the two mentioned above and down the most painfully picturesque alley was the Beatrix Potter shop and museum – shop downstairs, museum upstairs. The staff were super friendly; the museum, really consisting only of one small room, but full of stuff Beatrix Potter fans would like to see – old books, figurines, memorabilia, etc.

Next time we want to visit the Cathedral, and perhaps some crystal shops….there were a few dotted around, and to be honest, I’d love to have a little adult only time in some of the more esoteric shops. The whole city was much nicer than I anticipated – and even when mentally beating my sat nav up as it tried to force me to drive across bridges cars were not allowed on, we ended up at the docks as our turnaround spot and got a fantastic look at all kinds of large boats.

Gloucester is definitely a place we will return to! 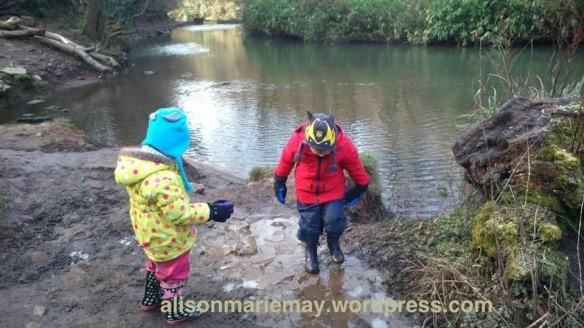 On a friend’s recommendation, we braved the freezing temperatures and went down to the river/woods to hunt for ice. And we found it.

I just didn’t realise that a large portion of the ice would be MY BODY. I’m glad we all had fun, but my god. I may never thaw out.