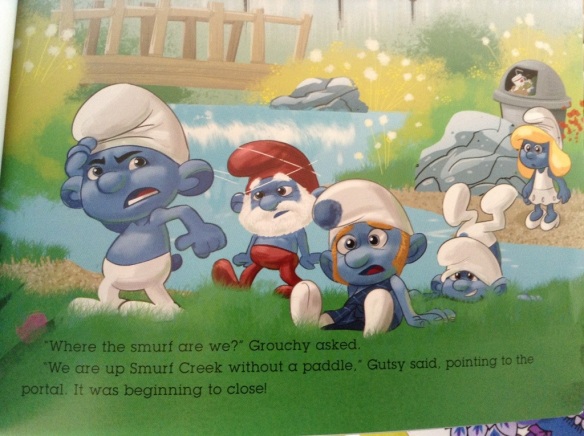 “Where the smurf are we?” Grouchy asked.

“We are up Smurf Creek without a paddle,” Gutsy said, pointing to the portal. It was beginning to close!

The book A Smurfin’ Big Adventure is simultaneously the worst thing I’ve ever read, yet the most intriguing. The dubious plot is spiced up by random nonsensical things being thrown in – portals, human beings (!), and endless TTDMS (things that don’t make sense). It’s well known amongst close friends that I like bad things. Things that are so bad they circle around to being good again. The movie Sleepaway Camp springs to mind.

The Smurfs, though, never fell into that category. They were smurftastic. My little smurfy friends. Until this book morphed the traditional exchange of variations of the word ‘smurf’ with any and all adjectives to a straight up expletive replacement. I half expected there to be a bank robbery, with the villains shouting, ‘Gimmie the smurfing money before I blow your head right the smurf off!’

To be honest, it makes me want to inject a little blue flavoured obscenity into my own life, though my wife has made it clear she doesn’t approve of my new ambition.

Perhaps it is for the best. Because those blue guys fight smurfin’ dirty. Look: 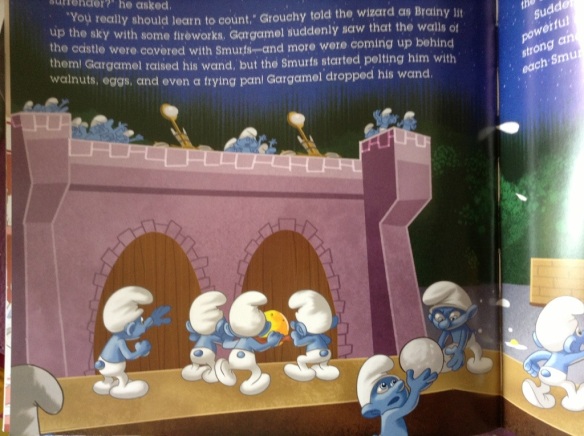 Gargamel suddenly saw that the walls of the castle were covered with Smurfs- and more were coming up behind them! Gargamel raised his wand, but the Smurfs started pelting him with with walnuts, eggs, and even a frying pan! Gargamel dropped his wand.

I’ll bet he did. It’s obvious that the poor guy suffers from food allergies and the Smurfs will stop at nothing to defeat him, even anaphylaxis. I hope he has an epipen hidden in his smurfing wand.