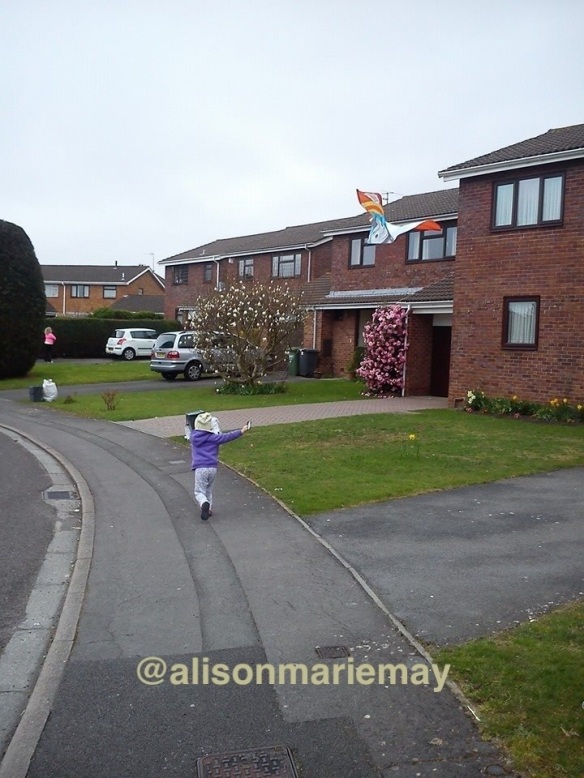 Early yesterday morning, my daughter said, ‘Hey, I feel like flying our kite. We should do that!’

I will be the first person to admit that sometimes it isn’t so easy to follow your child’s inclinations. I was unshowered, we didn’t really have time to go to a park, it looked cold outside, I had no idea where the kite was.

But I’ve already written about how I think embodying ‘YES’ to a child is one of the most important things I can do. (And I recommend you check that post out , because it felt so important to me when I created it….) And that ‘yes’ is what I strive to hit.

Besides, the whole kite thing sounded kind of fun.

Aaaaannd…..surely there was no harm just doing it in our street? We live in a very quiet cul de sac. I half heartedly looked for the kite for about an hour, taking frequent little breaks to tell the kind people on twitter that no, I still hadn’t found the missing kite. I even tweeted a picture of the dreaded cupboard under the stairs.

But as soon as I really committed to finding the kite, it appeared. And in a place I was sure I’d already looked twice.

We went out, leaving the front door open as M just wanted to stay inside. S was almost dancing in anticipation, and she was off. Cheeks rosy in the wind, gleeful instructions telling me she could just run along the pavement, experimenting with string length and gusts of wind.

One elderly neighbour watched us from her window, clapping and laughing. Another neighbour bumped into us and said a rather amazed, ‘WHAT are you doing?’ before grinning and wishing us luck. Still another stopped her fitness fast walking to watch us and cheer us on. It felt like a whole community adventure.

I felt free and wild and empowered. People were waving at each other and shaking their heads (in a good natured way!) when I whooped with joy louder than my little daughter (who is so big and powerful) when the wind caught the kite and raised it up. Even better when she declared she could power the kite by running, excited and joyful, exclaiming, ‘It went even further that time!’

She powered us all. She made us all feel happier on a very grey morning. She had an odd idea and ran with it, and I was lucky enough to have decided to go along with her.

She is going to go further and further. She can make ideas soar, bring people together, and most importantly, remind me that the most important thing I can do is show up when I can. Support her ideas, help her realise them, enjoy it right alongside her.

And as she carried the kite back to the house, she looked up at me and said, ‘This was so fun.’ Those four words erased an hour of kite hunting, of wind strung cheeks, of my sore body from chasing the kite when it went astray.

I showed up, I was present, and boy….did I have fun.

1 thought on “Sometimes it’s as simple as just showing up.”